Just Because a Majority Votes for Bigotry Doesn't Make It Right, or Legal

"I think people would have been happy to have a referendum on civil rights rather than fighting and dying in the streets in the South."

Apparently, the Governor is unaware of the fact that any such referendum in the south would have resulted in the continuation of Jim Crow (see the election of Wallace as proof). Apparently, he's not talking about the black people, who were doing most of the fighting and dying, since they obviously wouldn't have been happy to have a referendum where the white majority voted to continue Jim Crow.

Corey Booker, the mayor of Newark, NJ, had this to say in response:


But dear God, we should not be putting civil rights issues to a popular vote, to be subject to the sentiments, the passions of the day. No minority should have their rights subject to the passions and sentiments of the majority. This is a fundamental bedrock of what our nation stands for.
I get very concerned that we have created in our state, and we refuse to address and call it like it is, that we’ve created a second-class citizenship in our state. That’s what we have in America right now, we have two classes of citizenship.  Jackie Robinson said the right of every American to first-class citizenship is the most important issue of our time.
…
I read the 14th Amendment clearly. It talks about equal protection under the laws, and that was never something that should go out to a popular vote, whether blacks, women or other minorities should be equal, first-class citizens.

I wonder if Governor Christie would be so eager to put a referendum to the people on treating overweight white guys as second class citizens?
Posted by Unknown at 1/26/2012 04:28:00 PM No comments:

The Long Arc of the Moral Universe 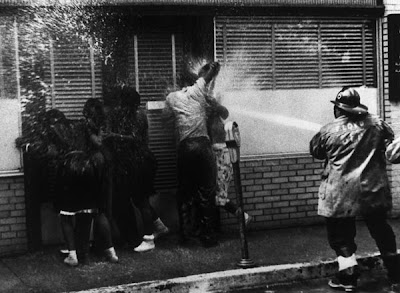 “The arc of the moral universe is long, but it bends toward justice.”--MLK

The older I get, the more I wonder about this. Yes, things are much better for many people. Poor people are still poor, but hey, according to uber-right Heritage Foundation, it's not so bad because they have refrigerators now! Way to bend that arc, boys!

Remember this King of Ironies: the motel where MLK was assassinated (while in Memphis fighting for union garbage collectors) is just blocks from the Peabody hotel where a bunch of ducks live in the Penthouse.

The GOP has all hands on deck trying to bend that arc back in the direction of rich white people. They stick their pry bar of fact-denial under the big arc, rest it on the fulcrum of hate and bigotry, hook up their elephants, and pull with all their might.

When faced with the fact that 45,000 people per year die because they don't have health insurance, they send out Senator 1% from Arizona, or former Senator Shitlube, to claim that it's not a lack of health care that kills them, but something else. Maybe they died because they chose to be poor. Or, in Santorum's case, maybe he thinks they're all gay and deserve to die for choosing that lifestyle. Or something.


"Rarely do we find men who willingly engage in hard, solid thinking. There is an almost universal quest for easy answers and half-baked solutions. Nothing pains some people more than having to think."--MLK

I can only imagine the headache Santorum gave himself when he tried to explain that he really said "blah people" instead of "black people." (So much for the Blah vote.) But then, Republicans, and apparently some Democrats and Independents, don't give a damn about the black vote. In fact, the southern strategy dictates that they get out there and blow those dog whistles just as loudly as they can if they want to get the vote that matters down south. Their continued battle against the Civil Rights Act might not get much traction outside the Paul campaign, but the GOP's war against the 1965 Voting Rights Act continues to this day, because their winning strategy is made up of two parts: get racist whites out to vote, and keep black people home. LBJ had some great things to say about this when he was getting the Voting Rights Act passed, as Charles P. Pierce pointed out in this awesome piece: On Our National Holiday, America's Everlasting War.


Race has popped up in the campaign this year. Newt Gingrich tripped over it while talking about food stamps and let's not even deal with the preposterous lie that Rick Santorum told about how he really said "blah people." Both of them were talking in gussied-up code, and they professed to be mystified as to how anyone could possibly think such a thing. And, of course, race has been a central theme (never a subtext; don't even try to make that case) in the irrational hatred directed at the current occupant of the White House. And it's not possible to read Lyndon's great speech — in which he called out  "every device of which human ingenuity is capable, has been used to deny this right" — and not think of all the smart little clerks all over the country with their smart little voter-ID laws who are so damned mystified as to why people are so upset.

Nobody is trying to bend that arc back more than Ron "Hate Whitey Day" Paul. The fact that a major candidate for President can get a large chunk of primary votes based on a philosophy that would allow states to return to Jim Crow and force women to give birth should be a shock, but it is not. A huge chunk of Republicans want to return to the 1950's, when women stayed home, even New Yorkers hated a black football hero (until he proved how well he could play), fire-hoses and dogs kept black people in their place, and wire clothes-hangers doubled as surgical tools. The only difference between Ron Paul and the whitest man to run for President in a long time is that Romney's religion was officially racist until 1978, while Paul maintains that just because he would let states return to their racist days doesn't mean he's a bigot.

On this point, I wonder what President Paul would do when Mississippi passes a law outlawing interracial marriage again, or when Texas passed a new anti-sodomy law despite the Supreme Court's ruling on Lawrence v. Texas...

Meanwhile, our extremely successful President faces a desertion from a bunch of lefties who, despite having handed GW Bush his "victory" in 2000 by voting for Ralph Nader in Florida and New Hampshire, apparently think there's no difference between Obama and Mitt Romney (who's foreign policy team is a who's who of Dick Cheney's war mongering friends).

Exactly how does one bend the long moral arc of the universe toward justice when a bunch of people who don't know what Strategic Voting means just stop pushing on our own lever, and let the GOP win?